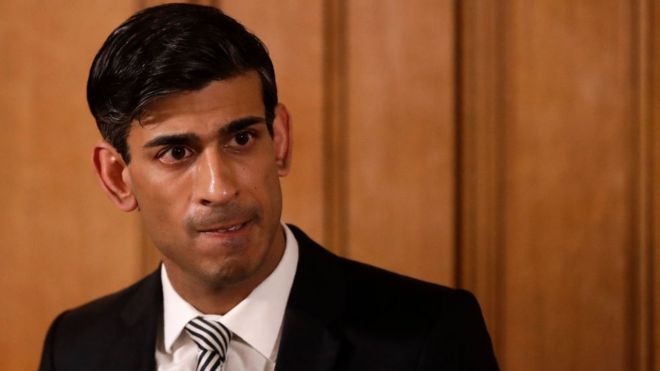 The chancellor is set to announce an employment and wage subsidy package to try to protect millions of jobs.

Talks went on into the night with business groups and union leaders, who urged the government to help pay wages amid the coronavirus pandemic.

Many firms are warning of collapse, wiping out thousands of jobs, as life in the UK is largely put on hold.

It is the latest in a string of big fiscal attempts to ease the burden on businesses and their employees.

Prime Minister Boris Johnson signalled Chancellor Rishi Sunak would be saying more on Friday about the extended package the government is putting forward for workers.

The PM has urged struggling businesses to "stick by their employees, because we're all going to need them".

One proposal under discussion is for the UK to follow the lead of countries such as Denmark, where the government has promised to cover 75% of salaries at private companies for three months, if they promise not to let staff go.

Businesses will be "watching carefully to see what government support comes in" today, says Dame Carolyn Fairbairn, director-general of the Confederation of British Industry.

"Many other countries have now done this - France, Germany, Spain, Italy have put employee wage support in place and if that comes through quickly I believe there are businesses who will take a different decision because they want to keep their people and they want their businesses to be viable for when we recover," she told the BBC.

The announcement will come just days after the government unveiled a range of financial measures including £330bn in loans, £20bn in other aid, a business rates holiday, and grants for retailers and pubs.

The Bank of England has cut interest rates twice in a little over a week to try to provide support to the UK economy, while lenders will offer a three-month mortgage holiday to homeowners in financial difficulty due to the virus.

On Thursday, the chancellor spoke to representatives of business groups and unions including the Federation of Small Businesses and the Trades Union Congress, where it was agreed more needed to be done to protect workers' jobs.

"As well as providing emergency support to business, it is essential that money goes into workers' pockets now. We must do whatever it takes to stop businesses going to the wall and workers being plunged into poverty," said Frances O'Grady, general secretary of the Trades Union Congress.

Negotiations went on into the night between the chancellor, business groups and unions over a package of measures to support wages and pay, as many British companies see their cashflow dwindle because of the coronavirus and measures brought in to suppress it.

All sides were speaking with one voice about an unprecedented scheme to help workers get through a temporary economic stoppage, although there is acknowledgement that it will not be able to make up all the gaps that emerge. Any such scheme will cost many billions of pounds.

Ideas discussed include guaranteeing some proportion - over half - of workers' wages, at least for specific sectors initially.

This follows the lead of countries like Denmark, which have guaranteed to support 75% of wages if firms do not make staff redundant. The support would be temporary, and could be linked to the 12 week period within which the PM mentioned the country could "send the virus packing".

The technical difficulty is how to operate such a scheme. It could be through the tax system, or as a series of guarantees to businesses, or informally after a significant tax holiday.

Former Business Secretary Greg Clark suggested in the Commons on Thursday it could work by using refunds on the Pay As You Earn tax scheme operated by all employers.

Labour is floating proposals to subsidise 80-90% of workers' wages. A formal government announcement is expected this afternoon.

Coronavirus: Eight charts on how it has shaken economies